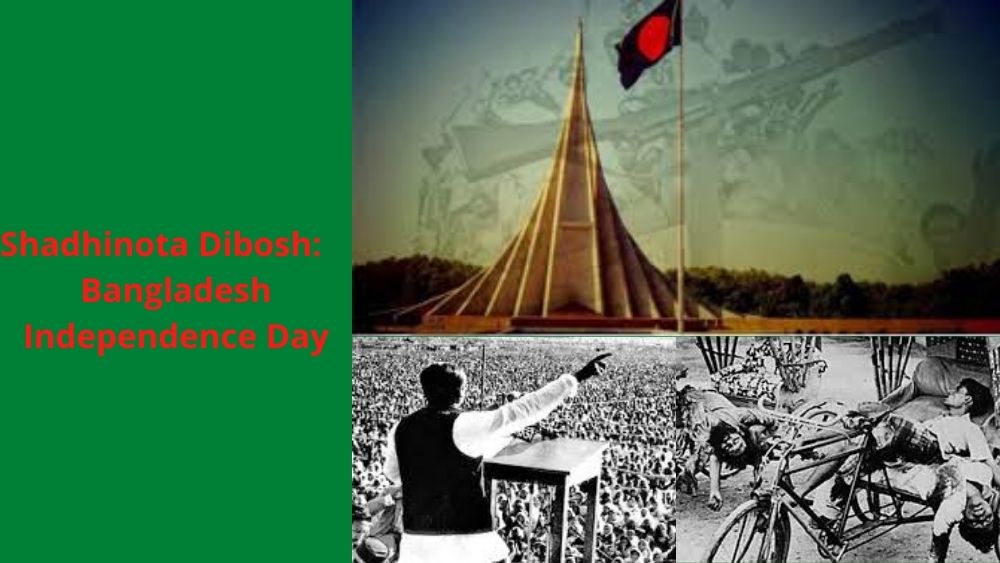 Saturday is March 26, and Bangladesh’s Independence Day. You may ask, what happened on this day, and why is it so important?

March 26 represents one of the key moments during Bangladesh’s (East Pakistan’s) fight for independence. It is the day that independence was declared by Ziaur Rahman on behalf of Sheikh Mujibur Rahman, starting the 9-month war in which many would fight, and more than 3 million Bengalis would lose their lives.

Events that took place before, during, and after the Declaration of Independence are crucial times to remember in Bangladesh History, from the partition of India all the way down to The Bengali Genocide.

Many small and big events slowly lead to our fight for independence.

After India gained independence from the British in 1947, the British viceroy proclaimed that their 200-year reign in India had come to an end. On August 14-15, 1947, the country split into 2 new states- Pakistan and India. Pakistan had 2 geographical parts which were separated by India, known as East Pakistan (Modern-day Bangladesh) and West Pakistan (Modern-day Pakistan. The Pakistani Government was situated in West Pakistan.

The reason for India’s separation was due to economical problems and especially the growing tensions between Muslims and Hindus. Many people wanted the 2 religions to have separate countries, since it was believed by a selected few that they could not coexist in the same country. So that was that.

In 1948, The Pakistan Government announced that Urdu was to be the only language of the state, receiving immediate refusal and protest from East Pakistanis, since the majority of the inhabitants spoke Bengali. University students and civilians began protesting for Bengali to be the national language as well. This lasted many years.

On January 31, 1952, It was decided that there would be an all-out peaceful protest, accompanied by rallies and strikes, on February 21. To prevent this event, the Government passed a British law which banned protests of any sort.

On February 21, 1952, students started gathering in front of Dhaka University, and the police formed a barricade at the entrance. The students disobeyed the law and began their peaceful protest, the police trying to scare them but to no avail. The police opened fire and killed many protestors on the spot; they are deemed martyrs to this day.

When news got out, Bengali people were furious, and thousands gathered in front of hospitals and all over East Pakistan. The government fell into turmoil, and in 1956, 4 years later, Bengali became one of the National Languages of Pakistan. All this struggle to make Bengali a language, however, was about to lead to something bigger.

Desire for an Independent Bengali Country

The East and West continued clashing after the Language Movement. West Pakistanis saw the East as “inferior and impure”, and East Pakistanis had started turning to the idea of there being an independent Bengali country. 2 events fueled this desire.

In 1965, the Indo-Pakistan War, or the Second Kashmir Conflict, took place. Both India and Pakistan wanted to claim all of Kashmir. When the war started, West Pakistan abandoned East Pakistan with almost no security. This made the East feel unprotected under Pakistani administration.

In 1966, due to these feelings of insecurity, the East made a 6-point demand under the leadership of Bongobondhu (Friend of Bengal) Sheikh Mujibur Rahman.

In 1970, the Bhola Cyclone swept across East Pakistan, killing approximately 300,000-500,000. West Pakistan responded quite poorly, and as a result, the East did not get as much help as they needed, increasing the feeling of insecurity.

In December 1970, an election took place throughout all of Pakistan. The election resulted in the victory of Sheikh Mujibur Rahman’s Awami League, who won 160 out of 162 of the general seats in East Pakistan. However, the West administration was not ready to give power to them, especially a certain Zulfikur Ali Bhutto. While finding ways to delay the handover of power, the Government started ordering the Pakistan military to close in and infiltrate East Pakistan.

By March 7, it was clear to Mujib that something fishy was going on. He called for a public gathering at the Race Course Ground (Suhrawardy Udyan). Through his speech, his listeners got the indirect message: The declaration of Independence. He told the people to prepare to fight for their country, to stand strong. In 2017, UNESCO added this speech to its list of world’s important documentary heritage. This speech is acknowledged for the spirit and courage it sparked among Bengalis, and for its line:

On March 23rd, peaceful negotiations between Butto and Mujib failed for the last time. On the night of March 25, General Yahya Khan gave the military the command to attack at nightfall. Sheikh Mujibur Rahman sent his declaration of independence to Chittagong.

At nightfall, March 25, the Pakistan Military began the genocide with Operation Searchlight, a military action issued by the government to suppress the Bangladeshi Independence Movement. Many people still refer to it as “the darkest night in Bangladesh History”.

They attacked Hindu neighbourhoods and villages that night, starting with Jagannath Hall, a Hindu dormitory in Dhaka University. Civilians were also not spared, and many rickshaw drivers and other innocent people were killed. West Pakistanis made their way to the Rajarbagh Police Lines, where the first fight against Pakistani forces took place. All in all, about 7,000 Bengalis were murdered, and 3,000 were arrested in the first night alone.

The following day, Sheikh Mujibur Rahman was arrested and taken away. But his speech still rang clear in the hearts of Bengalis. War was declared. The day afterwards, Mujib’s declaration was radio broadcasted by Major Ziaur Rahman (one of the sector commanders of Bangladesh Liberation War).

On December 16, 1971, Pakistan surrendered, ending the 9-month war and making East Pakistan the winner. However, victory came at a tragic price. An estimated 3 million Bengalis were murdered, Another 10 million had fled to India, and about 200 000 women were raped.

March 26 is known to Bangladeshis as Independence Day, or the day that independence was declared. It is a national holiday.

On this day, a 31-gun salute is directed early in the morning. Bangladeshis take part in parades, fairs, concerts, ceremonies and political speeches. Radio stations and TV broadcasts include special programs and patriotic songs to commemorate the day. The National flag decorates the streets. And, of course, respect is paid to Memorials in Dhaka and across Bangladesh.

Bangladesh had to undergo a lot of conflict, violence and struggles to become its own country. We got where we are today thanks to the brave Bengalis who fought for their country and for their language. Their sacrifice gave us a land with a powerful history. It is something to be proud of.

Another amazing source was my dad; He knows a lot about the Bengali Independence War, and I could not have done this without him!