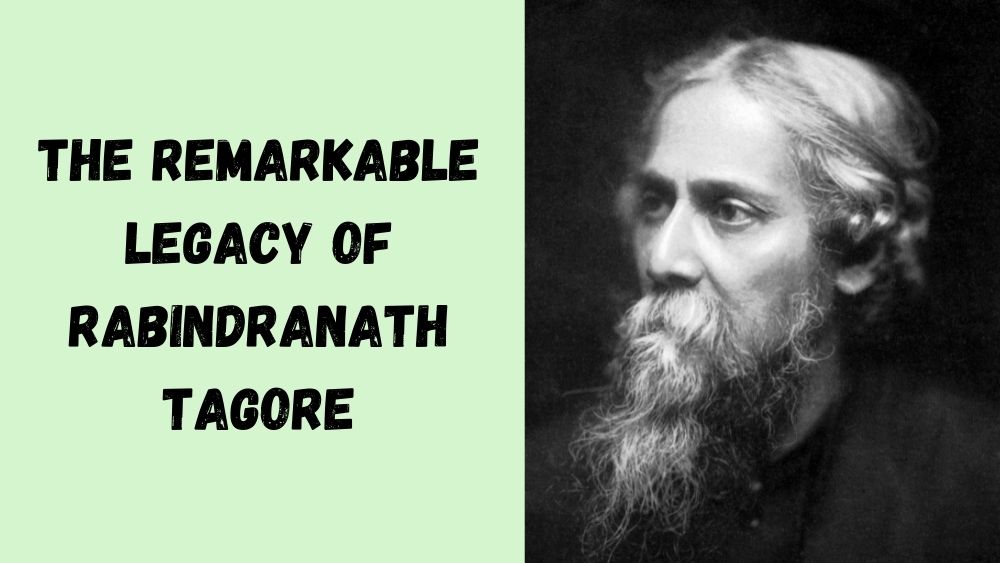 Get this… this man hated the school education system. He found school inferior, boring, and was overall not interested in it. In fact, he dropped out of school. And university!

He believed the target of education was self-recognition. He was able to realize the universal soul within him and in nature. He felt this as the true objective of learning. This same fellow grew to be a polymath. He was a composer, philosopher, painter, social reformer, playwright, poet, and writer. He established new essay and verse forms and the use of ordinary or familiar language into Bengali literature. He was a big supporter in bringing Indian culture into the light, and was a bridge in introducing the West to India and vice versa. He even won the Nobel Prize for Literature in 1913, making him the first Indian and first Asian to win this prize!

This person is best known as Rabindranath Tagore. He had a remarkable family legacy, an incredible life, and a ton of unimaginable accomplishments/great feats.

Rabindranath Tagore gained a lot of fame in his time. However, the Tagore family was very popular long before he was born. With over 300 years of history, The Tagore family was one of the leading families in Kolkata, and immensely wealthy as well. Their original surname was actually Kushari, and to begin with, they came from a village called Kush in India. They were Bengali Brahmins. The Kusharis were the descendants of Deen Kushari, the son of a famous Sanskrit scholar, Bhatta Narayana.

The Tagores continued living in one area until generations later, when a branch of the Tagore family left their ancestral village and relocated to the Eastern part of Bengal. In some time, different Tagore families were scattered across India. There was the Pathuriaghata family, the Gobindapur family, and the Jorasanko family, the family of Rabindranath Tagore.

The founder of the Jorasanko family was Dwarkanath Tagore, Rabindranath’s grandfather. He was one of the first Indian industrialists to form an enterprise with British partners and entrepreneurs. Out of the many sons he had, his son Debendranath took the reins and led the Jorasanko family following his father’s demise. He was a Hindu philosopher and religious reformer, as well as the founder of the 1848 Society of Brahma, or Brahmo Samaj.

Around this time, the Bengali Renaissance began, ushering in a societal transformation in the 19th century, when creative activities flourished. Debendranath Tagore was a key influencer of the Renaissance, and many of his children stood out through their musical, artistic, religious, social, business and literature talents. Rabindranath was one of them, of course, but he had a number of popular siblings. His oldest brother Dwijendranath was a philosopher and poet. Another brother, Satyendranath, was the first Indian appointed to the elite and all European Indian Civil Service, while one more brother, Jyotirindranath, became a musician, composer and playwright. His sister Swarnakumari Devi was a poet, lyricist, journalist, social worker and novelist; she is the first Bengali woman to write a novel in Bengali.

The Tagore family legacy passed from generation to generation. Those who came after were also gifted in the arts category, such as Indira Devi Chaudhurani (Rabindranath’s niece), Pramatha Chaudhuri (nephew) and Rathindranath Tagore (son). At some point though, the Tagore family came to an end.

But let’s back up a bit… Let’s shine the light back to the life of probably the most famous Tagore who’s ever lived, the one who changed how the world viewed India, the one who made his mark in history.

And what a remarkable life he had.

Rabindranath Tagore was born on May 7, 1861, in Kolkata, India. He was born to Debendranath Tagore and Sarada Devi, and was the youngest of 14 children. Tagore was brought up mostly by the family servants, as his mother had died in the early years of his life, and his father traveled far and wide, often staying away from home for long periods of time. Growing up, he followed cultural practices and showed an interest in the arts, like his family.

However, Tagore was not fond of school, and its education system. He avoided school as much as possible, and was mostly homeschooled by his siblings, especially his brother Hemendranath. The boy was tutored and physically conditioned in wrestling, gymnastics and more. He practiced drawing, anatomy, geography, literature, history, math, Sanskrit and English. At the age of 8, Tagore wrote his first poem, and when he was 16, he published his first large collection of poems.

When he turned 11, his father took him and together, they toured India for many months, visiting numerous areas owned by Rabindranath’s father. They arrived at Himalayan hill station of Dalhousie. There, Rabindranath read biographies and studied history, astronomy, modern science, Sanskrit, and examined classical poetry. He and his father usually visited the Golden Temple, where Tagore listened to compositions by Sikh gurus. These melodious times impacted him greatly as well.

In 1878, due to his father’s wishes for him to be a barrister, he was enrolled in a school in England, and stayed in a house owned by Debendranath. His sister-in-law and her children also joined him there. At first, he spent a little time studying law. However, he soon enough ended his time at the university he went to, as he had better plans. Tagore independently studied Shakespeare plays, and lively English, Irish and Scottish folk tunes. He returned home degreeless, but that did not faze him in the least. He started regularly publishing poems, stories and novels, which had a heartfelt influence surrounding Bengal culture, but was unnoticed nationally at the time.

In 1883, 22-year-old Rabindranath Tagore married 10-year-old Mrinalini Devi, (normal custom at the time) and had 5 kids. 7 years later, they all went to the Tagore’s ancestral estates in present-day Bangladesh. During his time there, Tagore kept on writing. The grief from the deaths of his wife, two kids and his father did not stop him; he turned his sorrow into newfound hope and inspiration, (as he did years before, when a much loved sister-in-law of his committed suicide) which he used to write many more fine poems of his, which are still read worldwide today.

This took him to his ‘Twilight years’- the phase of Tagore’s life as a roaming literateur. He also became an activist. Tagore was concerned on the matter of Indian caste systems. He reasoned on the evil of these practices, and wrote poems and dramas on this theme. Even in the last decade of his life, he remained as active as ever. Old age didn’t slow him down! Rabindranath criticized Gandhi, an important figure in India, for his comments on a disastrous earthquake. Gandhi had said that the cause of the earthquake was the caste system, and that God was punishing India for casteism.

And Rabindranath never stopped writing. Even as he was going in and out of comas during the last 4 years of his life, he would write about his near-death experiences when he was awake and well enough!

Rabindranath Tagore died on August 7, 1941, in the Jorasanko house where he was born. But we shouldn’t remember him because of his death. His legacy lies in his many achievements, more amazing than people can even dream of. He sure was a unique man.

He is perhaps most famously known for being the first Indian/Asian to win a Nobel Prize for Literature in 1913, for his collection of poems called the Gitanjali. Not only did his work cause awareness in India and its culture, but he himself got his honour and reputation strengthened, and his fame spread all over the world.

In India, he was awarded the Bharat Ratna, India’s highest civilian award. In 1915, he was given a knighthood by the British. However, he was so horrified by the Jallianwala Bagh Massacre carried out by the British in 1919, that he renounced his knighthood.

Throughout his life, he wrote over 50 volumes of poetry, and 2230 songs, including numerous short stories. Some projects of his included a 100-line poem about poverty in Kolkata, 15 volumes of prose poems that covered many parts of human life, and biology, physics and astronomy essays. He also had some notable English works.

This person is probably not recognized in many countries like he was so long ago. But in India and Bangladesh, he is still as famous as ever. He is the reason Indian culture is known all over the world, and he left behind his poems, his songs, his stories and plays… it would take more than a lifetime to go through them all! He turned sorrow into poems, he stood up to the wrongdoings of others, and he was able to realize himself through the spirituality inside and around him, through his family, through his deeds and as a whole, through his life. We will truly never meet another like him. So let us take moments in our lives to remember the polymath, Rabindranath Tagore!

As Tagore once said, ‘You can’t cross the sea merely by standing and staring at the water’.

2 thoughts on “The Remarkable Legacy Of Rabindranath Tagore”